This weekend I received a long overdue and much-anticipated birthday present. For my birthday in May, my boyfriend Keenan gave me a gift certificate for a cooking class for two at Rustico Cooking in New York City. It took us forever to actually schedule the class. I was still living in Massachusetts this summer; and when I found a date that we were both available, the class was already filled! Almost six months later, and we finally made it to Rustico's "Essentials of Italian Cooking". 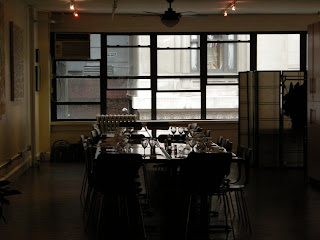 Set in Midtown on West 39th St, Rustico occupies two floors. The kitchen is beautiful, clean and spacious--plenty of surface area, stovetops, and ovens. A little video camera is set above the stove so that everyone in the class can observe from a large flat screen TV. (Watching myself on the TV as I stirred the béchamel, I felt like I had my own Food Network show!) 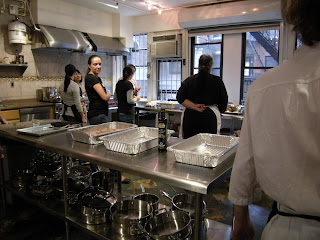 The dining area features long wooden tables surrounded by large, colorful paintings. It was such a gorgeous space that I felt excited as soon as we arrived. There were about 15 people in the class. People timidly chatted and kept to themselves as we snacked on salami and a quesadilla-type appetizer. Rustico Cooking was launched in 2002 by Micol Negrin, a native Italian and author of two cookbooks: Rustico: Regional Italian Cooking and The Italian Grill. Micol's bold, Italian spirit set us at ease and encouraged to dive into the kitchen.
Micol explained that the first thing you do when cooking is look at the big picture: What am I making that requires the most time and preparation and then work from there. So we added the chicken for the Chicken Caccitore, which had already been marinating for two days, to the oven.
Next, we needed to get the fennel in the oven to roast. But first, Micol instructed us to blanch the fennel, which helps it to become more tender than just popping it straight in the oven. After blanching the fennel, we just sprinkled it with some olive oil, salt, pepper, and Parmigiano Reggiano cheese and left it in a 425 degree oven for about 45 minutes. This same method can be used for roasting all sorts of veggies: parsnips, cauliflower, potatoes. Such an easy way to cook vegetables that delivers so much flavor.
The sauce for the chicken was also very simple. We sautéed onion, garlic, and some red pepper flakes in oil. Then added capers, chopped tomatoes, and anchovies. Anchovies are one of the few foods that I actually hate, so I was a little nervous about this. However, we only added about 4 anchovy fillets to a sauce that would feed 15 people. In this dish, the anchovies aren't meant to be a main feature; they just flavor and add depth to the sauce. 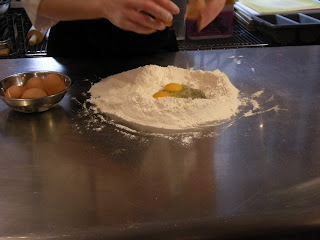 While the sauce simmered and the flavors meshed together, we started making our own pasta dough. Having never made fresh pasta before, this was the part I was most looking forward to. Micol showed us a very interesting technique for making the dough: form a ring with flour on your work surface. In the middle of the ring, add your eggs. Beat the eggs with your fingers, and slowly incorporate the flour. Once everything comes together, the dough will look messy and sticky. This is okay, Micol assured us. You want to work with and knead the pasta dough; it is not delicate like bread or pastry. Using the heel of your hand, you knead the dough in a circular motion until it reaches a smooth consistency.
We cut the dough into even pieces and divided into teams of four. Each team got a piece of dough and we took turns running the dough through the pasta machine. We first started on level 1 (the thickest level) and ran the dough through 3 times. Then we progressively turned the dial to a thinner setting and ran the dough through until we had a loooong, thin piece of dough. It was amazing to watch it go from a round ball to such a long, smooth strip. 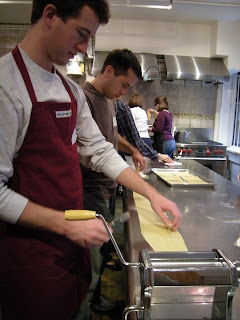 Because we were making cannelloni, we cut the dough into even squares. After boiling the pasta squares for only two minutes, we added the filling (ricotta, mozzarella, egg, prosciutto) and rolled them up. We then lined all of the individual cannelloni in a large pan and covered them in the béchamel sauce we made earlier. These baked in 300 degree oven for 30 minutes.
It wouldn't be an Italian meal without something a little sweet. For dessert, we made orange-scented chocolate-hazelnut biscotti. However, these weren't you're traditional biscotti; these were actually mono-cotti. Biscotti translates to "twice baked". That is because you first make the cookie dough, shape it into a log, bake it, cut it into pieces and bake it again. This is why biscotti have that crispy, crunchy texture. We eliminated the second baking step in our procedure; hence, mono-cotti: once baked. This created a much chewier, fudgier texture to our cookies (and much preferred to the dryness of some biscotti).
After about two hours in the kitchen, it was finally time to eat! 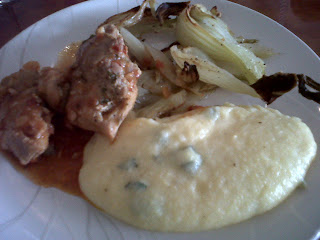 The dining table was set beautifully with an assortment of wines. Micol's handy assistants did all the plating and serving of the food, so that was a nice break after working so hard in the kitchen. I don't know if it was the food, the wine, or just the fact that we had all been cooking together for the past 2 hours, but everyone was much more open and talkative than at the start of the class. It's amazing what a little food and booze can do to social settings...
The Chicken Cacciatore was great. The chicken had so much flavor from marinating for so long, and was super tender from cooking in the sauce. The sauce also had great flavor (thanks to those
anchovies!). The fennel was also delicious. I'm not
a big fan of raw fennel, but I love it 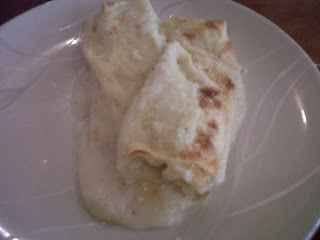 cooked. Roasting the fennel really softened its pungent flavor, and gave it a nice crispy bite on the ends. But the cannelloni were definitely my favorite part of the meal. There's just something about baked pasta with cheese, that you can never go wrong. It was amazing how much you could tell the difference with the fresh pasta--the cannelloni literally melted in your melt. Unbelievable!
And of course, dessert... I was definitely a fan of the mono-cotti. They were more similar to a chewy cookie, or even a brownie. I'm somewhat of a chocolate purist, so I don't love fruit flavors mixed in, but the orange did add a fresh note. The biscotti were very easy to make, so next time I would probably omit the orange zest and orange liquer, and add some coffee grounds or coffee liquer instead. :) 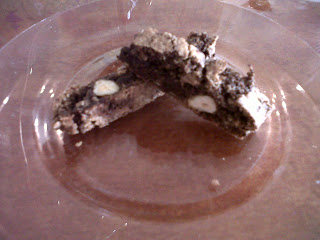 Overall, everything was delicious, and tasted even better because we made it all. Perhaps even more entertaining than cooking and eating was seeing Keenan in an apron (he's had to call me before to ask how to cook pasta...sorry for ratting you out, Keenan!) It may be a few months late, but this was a birthday present I will never forget.
Click here for a list of Rustico's unique and authentic Italian recipes!
Posted by Cara Colbert at 6:22 PM